Hello beauties! just a quick post today to show you some stuff ;) 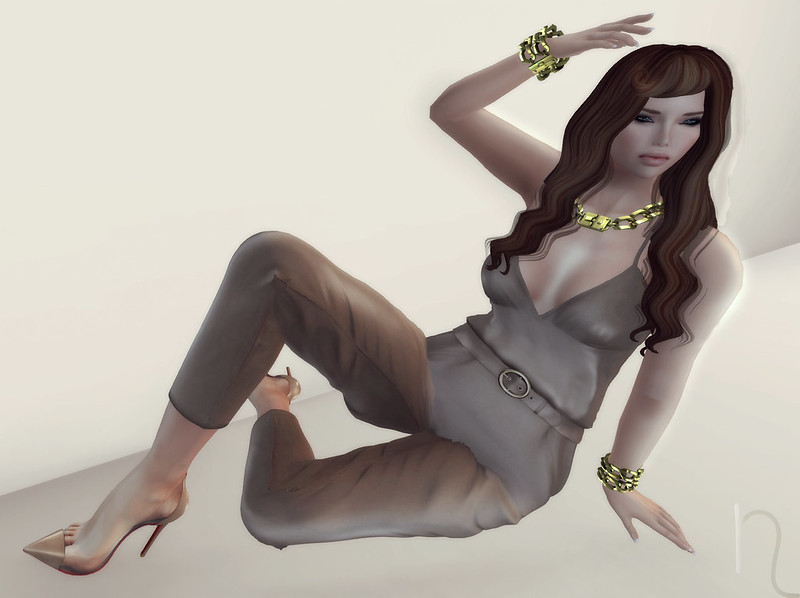 Hello beauties! As always there are a bunch of events over the Grid, but today I’m gonna talk to you about two of them, My Attic @ The Deck and The The Dark Style Fair.

My Attic @The Deck opened it’s doors last week with a new round you will find brands like Milk, Pure Poison, Mina, DCNY, Ploom, Le Primitif, Somnia to name a few and most of the items available for only 95L.

On the other hand, until June 7th. there is The Dark Style Fair that I’m sure most of you already went. There you can find a lot of clothing and accessories of course most of them in black and as the name of the fair says for a dark style.

So hurry up before the fair ends and grab everything you want at The Attic, you cannot miss the bargains. ;) 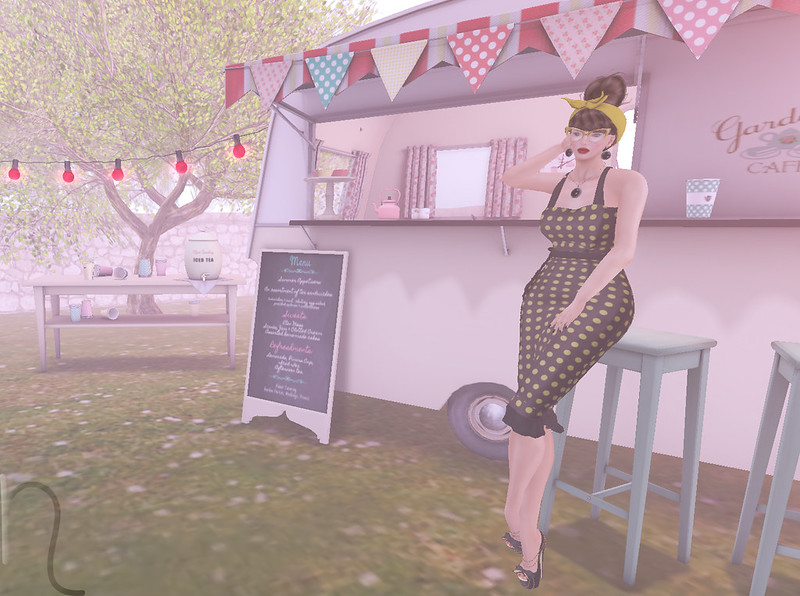 Hello beauties! Today I wanted to dress a bit urban style, so here we go…

The shoes are a new release from Deer, as always when you buy Deer shoes you get the whole fatback so you can customise them on every color you want to fit your outfit. The hoodie is also from Deer and they also come in different colours, you buy a pack and in each one you get 5 different colours with different designs.

Twenty13 released this cool baggy shorts recently, they are really fun to wear so you might check them out too.

Last but not least the hair is from Milk and it’s very cool, it comes in two different version one in normal like the one I’m showing you and the other one is holdable and you can use it with the two different poses that come in the pack. 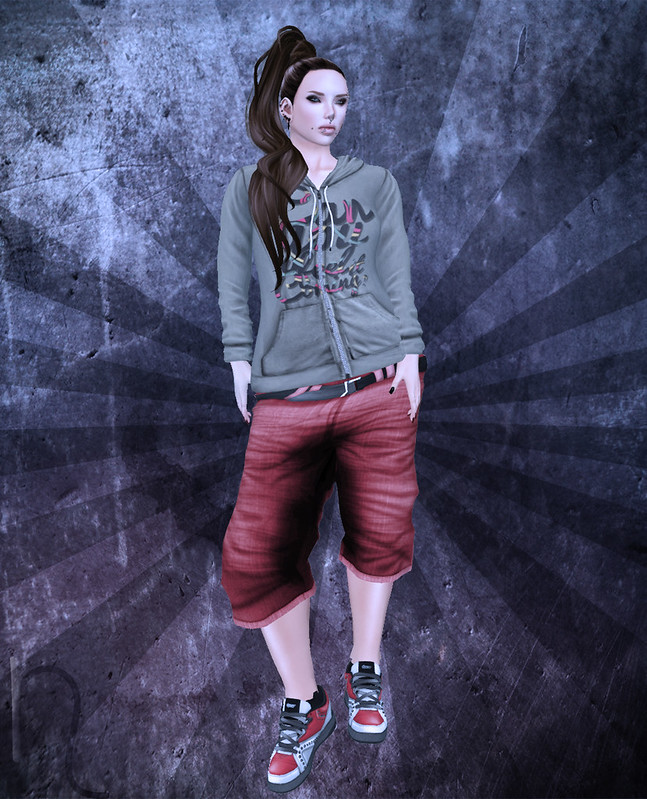 I would like to welcome Intrepid as my sponsor, I was really happy that Ally chose me to be part of her bloggers, so I just run to the store and get some nice goodies.

Today I’m showing you this crop shirt and skirt which come in 4 packs of colours and each of one comes in 6 different colours as well, so you can change to the color you want using the hud that comes with them.

Intrepid has released this nice pair of boots that have the same system as the shirt and skirt so on each of the 4 available packs you will get 6 different colours.

Since last friday The Dressing Room Fusion has a new round so I picked up this punk type of hair from Loq. It’s the fatback so you will be able to use it in whichever color you prefer. Today I went redheaded. xD 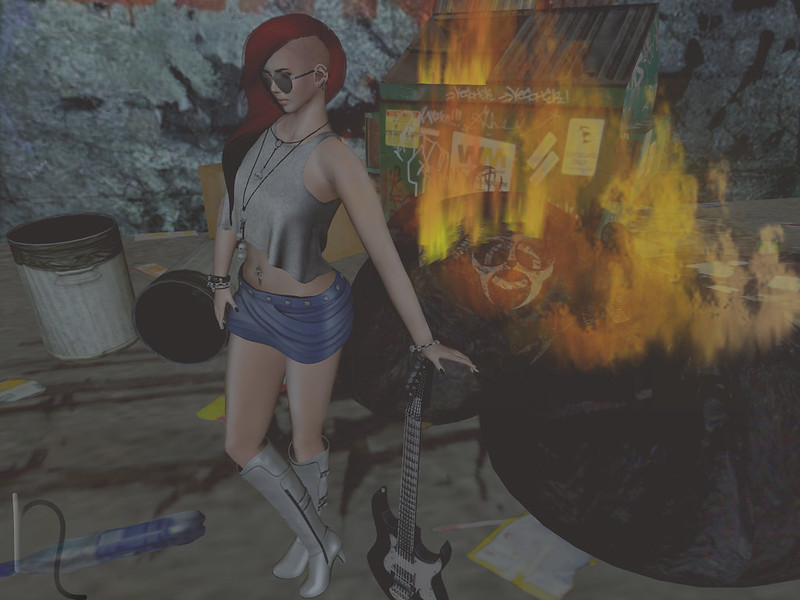 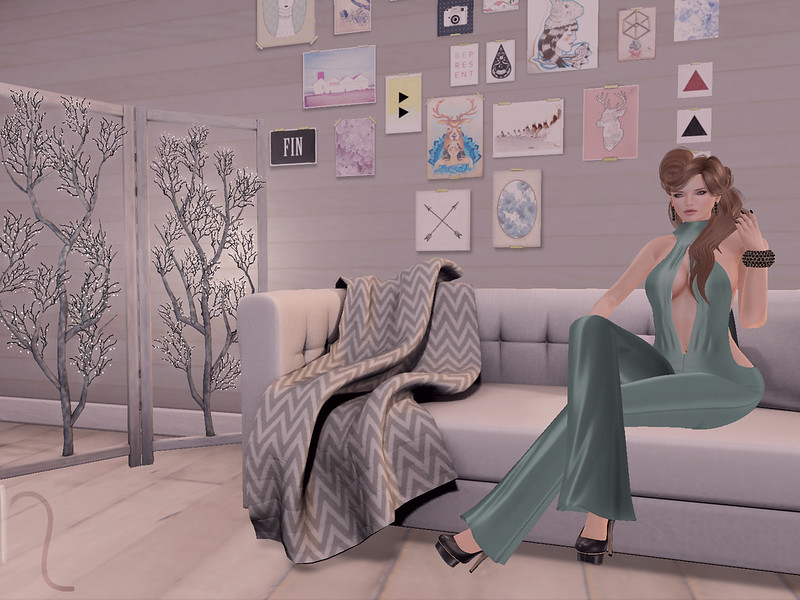 Hello gorgeous! Today I will show you some other stuff available at Kustom9. So here we go! 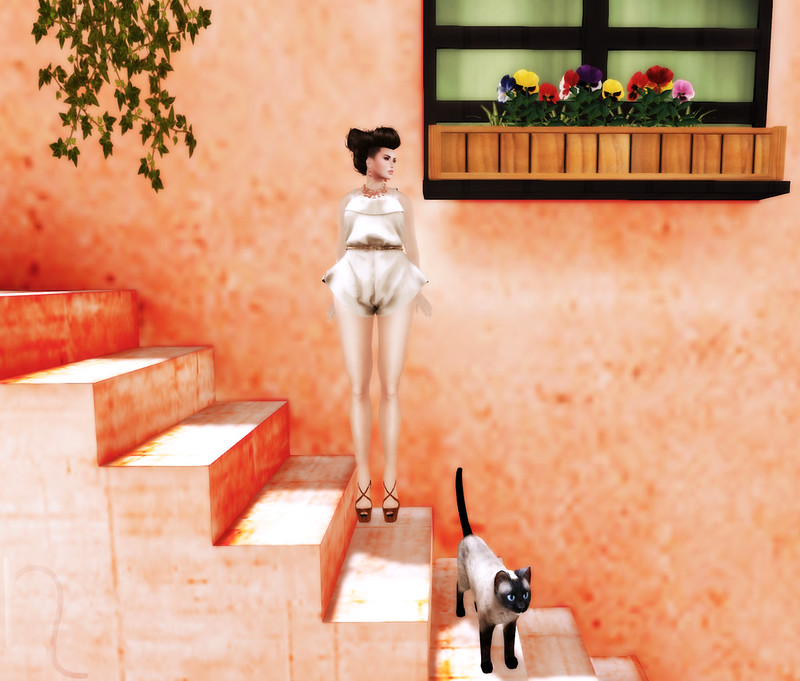 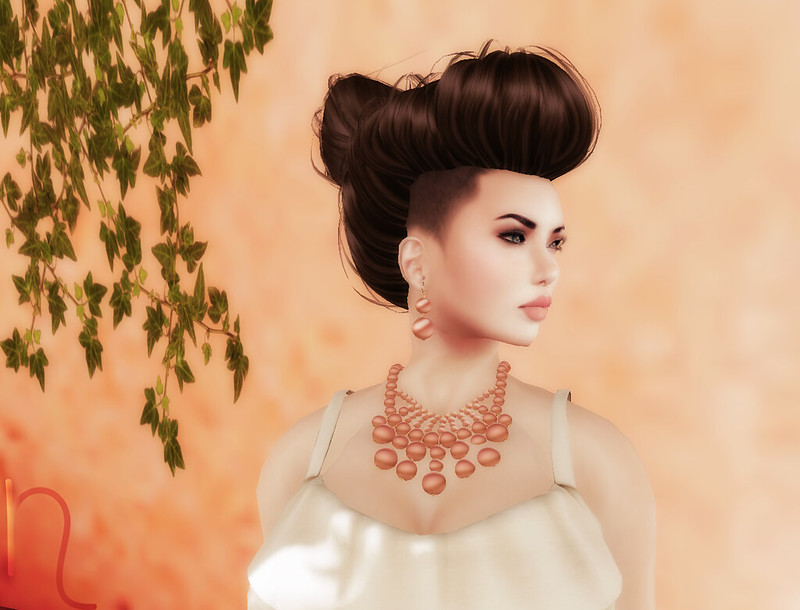 Down to business… A new round of Kustom9 is available, so I went there and as always I went crazy shopping! So today I’m showing a pair of shorts and top from Motiame which is available in various colours, but as I always go for dark colours I got this nice black white dot top and this shorts in white. Faun has available this beautiful gladiator sandals for Slink flat feet. It’s available in black, coral, beige, pink and other colours so you can match your outfit with them perfectly. 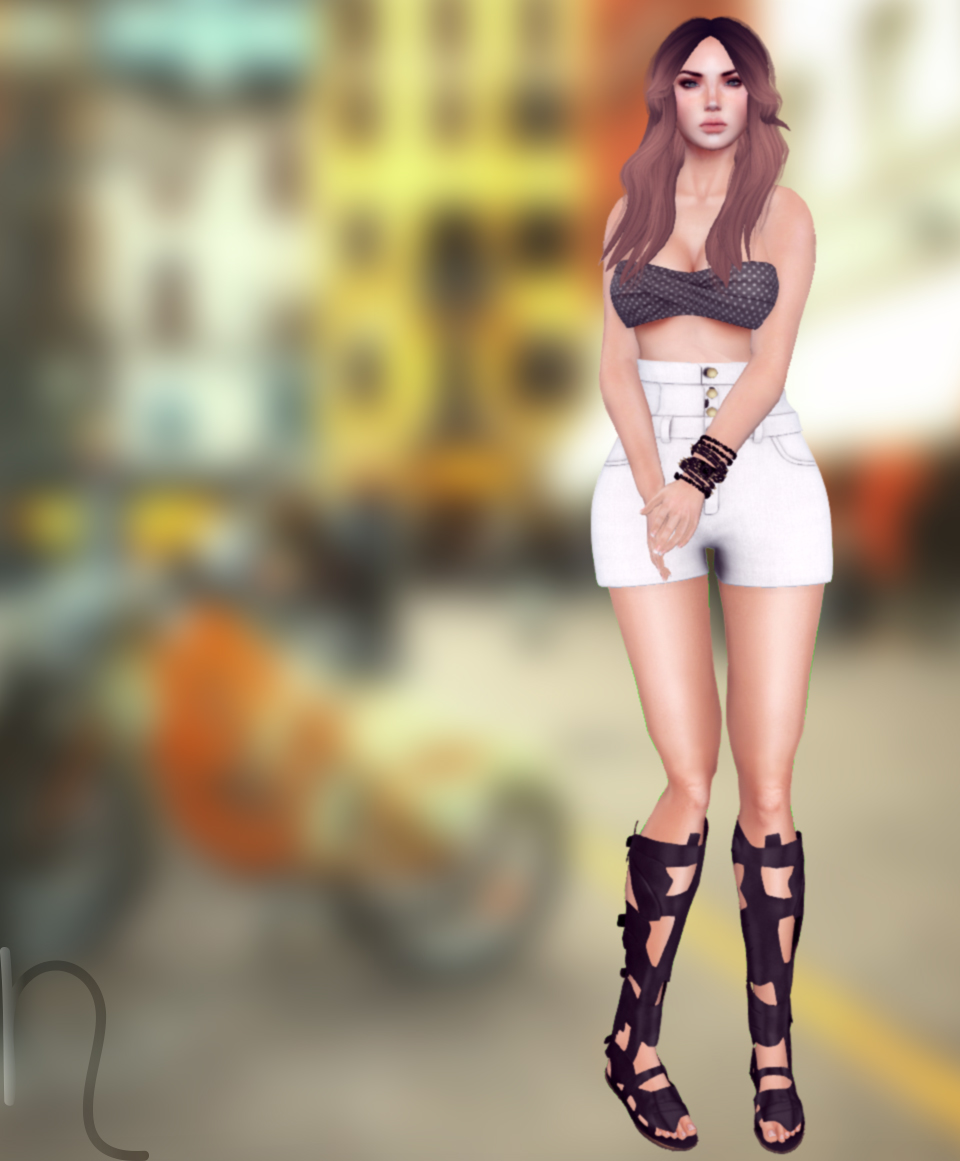 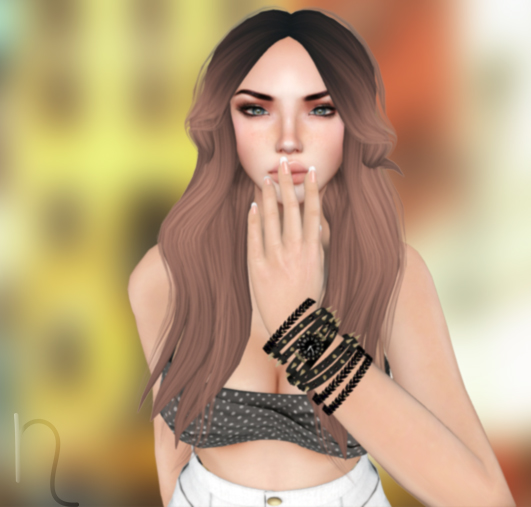 You probably know already that one of my favourite blogs is Strawberry Singh’s blog, and this past week she made me remember a lot of stuff. I’m not doing one of her meme challenges but I’m going to talk about a little bit of my SL life as she remembered hers on her 7th rezzday birthday so probably this post might be “just a little bit” longer than usual.

Let’s start with my Second Life. I started playing second life back in june 2008 when you could still find malls full of freebies  and much nicer people or at least people were much more trustable, I will always remember Magda Magnolia, this european woman who adopted me and gave me a house and 300L, she taught me how to build and how to dress up.

Back then I wasn’t in fashion at all, I used to use the shape a friend gave me which was really tall and curvy and a Redgrave skin and of course bling shoes (I always remember that in the local chat you could always read “bling on” “bling off” ’cause that was the way to turn on or turn off the bling on the shoes), but my favourite brand back then was Armidi, I used to love every single thing they had! It was a sim full of nice and for me at that time, really expensive clothes and accessories.

Then I met “the guy” that guy that changes your whole world who became my boyfriend in sl for more than two years but we also met in RL, he lived in my city and we ended up having a long affair in RL. He introduced me to Bloodlines and to make the story shorter I ended up being a Vampire Clan Queen. At that time I used to be gothic and my wardrobe was full of Gothicatz clothes, but used the same hair and the same skin for ages lol.

I left SL for about two years and when I came back mesh clothing was the it thing and I couldn’t believe how pretty the avis looked, so I started to dress “normal” and became the shopaholic I’m now. Now I’m just a regular girl who meets with her friends, goes to parties and on the weekends takes pictures of herself after playing barbies to post in this blog. :) 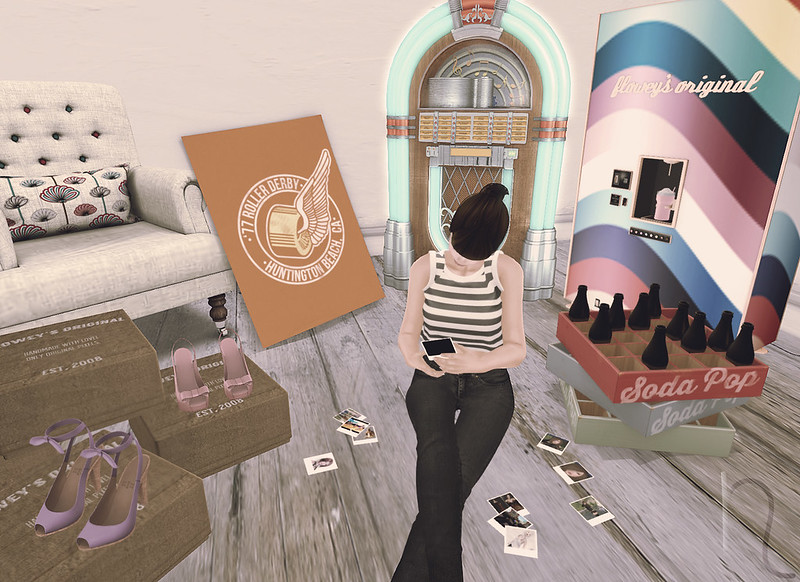 Today I want to talk to you about one of my favourite places to take pics, it’s called The Veeper’s and it’s owned by Coqueta Georgia and Vlady Veeper. They put up this place for everyone to take pictures or just hang out, here you can even rezz your own poses and they have different places around the sim where you can take the best shot.

But let me tell you something else about Coqueta, she is not only one of the nicest persons I’ve ever met but she is has a really good taste on interior design and landscaping, oh! she is a great photographer too! If you want to check out her pics here is the link to her Flickr account https://www.flickr.com/photos/98707835@N03/ 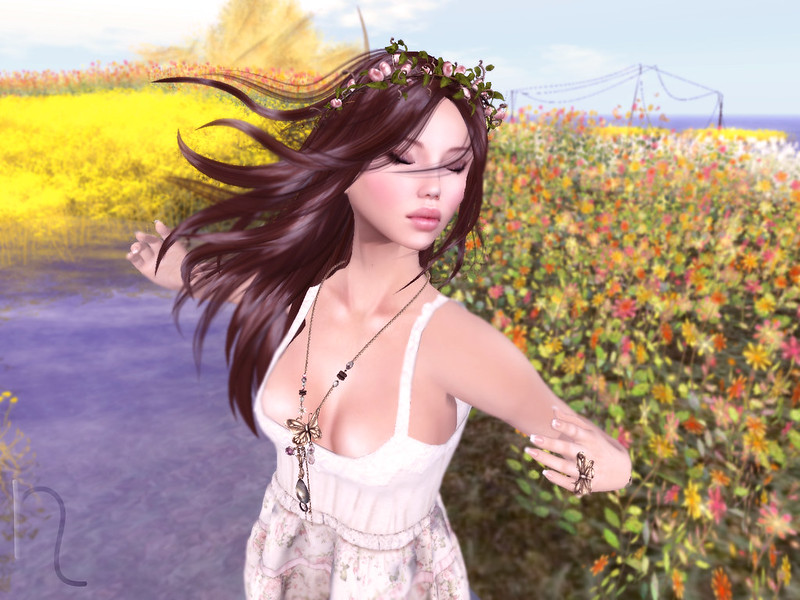 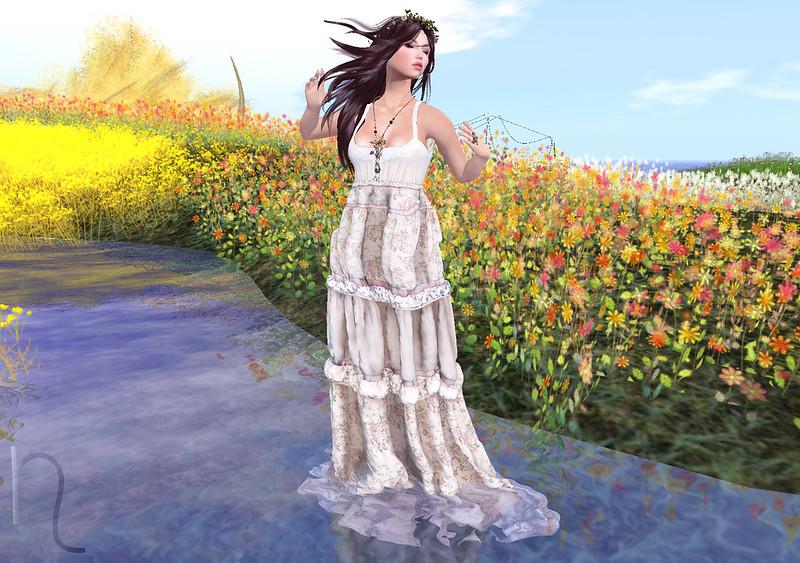 As the month started new rounds of events come in our way, that is the case of Fameshed and I want to show you some stuff available this month for its new round. 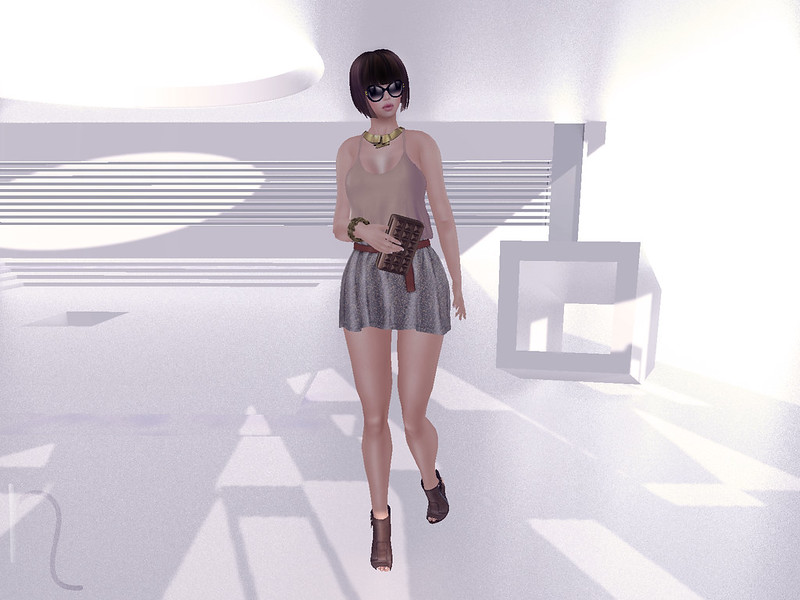 Ricielli released a new collection and all of the stuff available come in regular and fitted mesh, there are lots of new and fabulous things available. The new collection is not in the main store but in a temporary location only for the new fitted mesh clothing. You should check out the new stuff from Ricielli, don’t miss it! 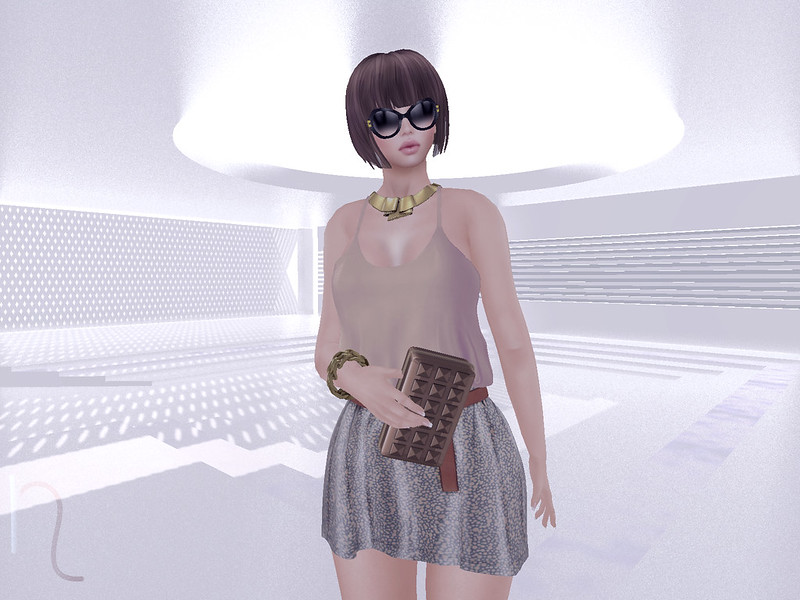 Last but not least I really want to thank Absi Montenegro for letting me use this amazing building made by William Weaver.